In Junior High, the students begin to change classes on a regular basis. The goal is to prepare students for High School. Developing independence and responsibility. Students can receive the sacrament of confirmation to help them start ownership of the responsibility of their faith.

Social Studies Geography of the Americas, first Americans, European explorers, English colonies, American Revolution, the Constitution and the Civil War. Junior Achievement and a career unit is also included, Science Earth’s surface, minerals, rocks, erosion, geologic history, energy, earthquakes, volcanoes, water cycle, weather/climate, solar system, and universe. English Review work, more complex sentence structures, and 8th graders biographies. Literature The topics covered in 7th grade are reviewed and expanded upon. Algebra 8th Grade Algebra is divided into 2 sections. One section follows the Archdiocesan Honors Algebra Program. Students in 7th grade who perform within the top of their class in Math and on the Terra Nova test are eligible to take a placement test in March to determine their eligibility to be enrolled in the Honors Algebra Program.

The curriculum includes the following:

The second section is also an in-depth study of Algebra including the following concepts:

The 7th Grade course of study in Math includes and intense Pre-Algebra program in which students are introduced to the language of Algebra, evaluating algebraic expressions, solving algebraic equations, integer concepts and operations, operations with fractions, decimals and percents, statistics and probability.

8th Grade Religion The primary focus of 8th grade Religion is the preparation for the Sacrament of Confirmation. We also study the history of the early Church and advancement throughout the first several centuries.

In order to maintain an appropriate Christian school environment, good behavior is expected and is to be followed by all Junior High students. Failure to meet the expectations will result in the accumulation of demerits. Rewards and disciplinary action will be dealt with according to the number of demerits accumulated in any given trimester. After six demerits, detentions are given.

The students are given special rewards for those that demonstrate good behavior. 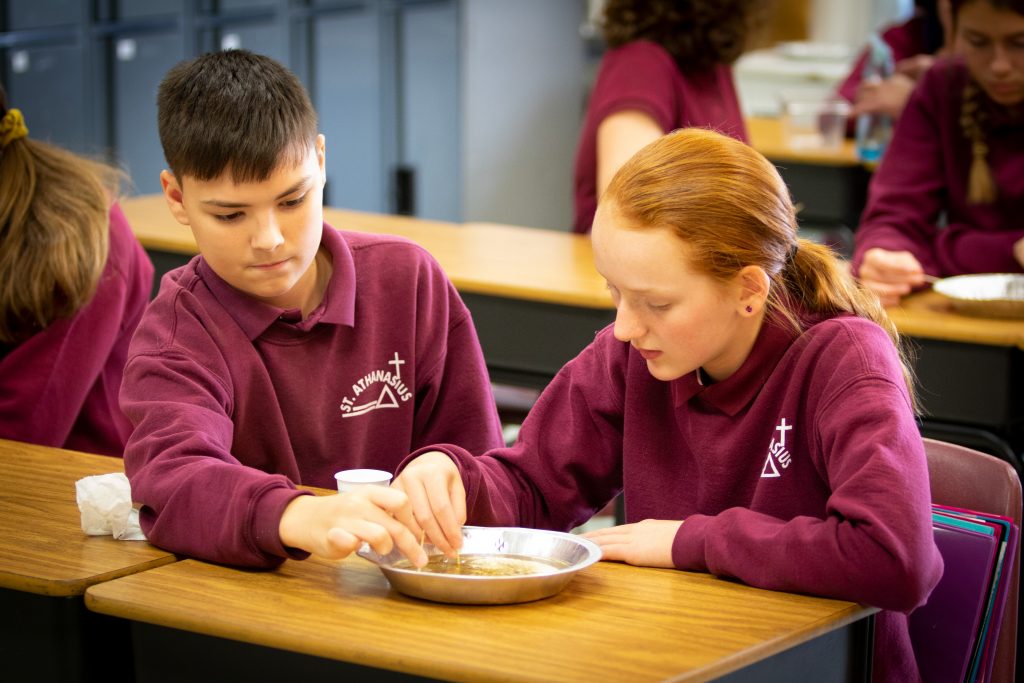